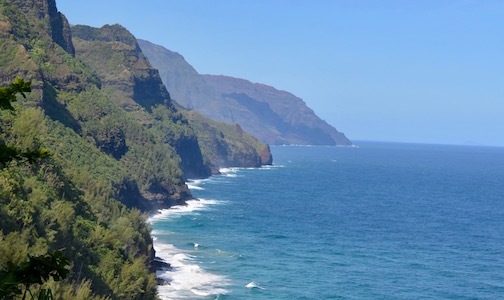 Lush tropical forests, sweet clean air, razor-thin ridges that plunge to the sparkling ocean, and gold-pink sunsets—Kauai is a dream from which you don’t want to awaken.

Recently my friend and I spent two weeks in Kauai chasing sunsets, exploring verdant valleys, and laying on as many beaches as possible. The northern most island of the Hawaiian chain, Kauai has 113 miles of shoreline, of which 50 are beaches, so plenty to explore.

Yes, it was a hard two weeks, but I did it for you, Dear Readers.

Okay, I did it for me, too (mostly for me). The only negative: I returned with little pinch-mark bruises on my arms, since about 10 times a day I had to make sure I was awake and this was all real.

If for some tragic reason you can only spend three days in Kauai, here is my must-do Kauai dreams list. The most beautiful, least populated sights required some effort, but were well worth it.

Top Five Dreamy Things to Do in Kauai

Number 1: Take a boat ride along the Na Pali Coast. Yes, you have to get up early (6:45 a.m. arrival to Hanalei Bay). Yes, it may be raining as you wade in the ocean to board your boat. Don’t let these details stop you.

Stretching 15 miles along the northwest shore of Kauai, the Na Pali coast is wild and so severe in formation that only a one-to-three-foot wide hiking trail hugs its cliffside. Otherwise, you can see it by helicopter or boat.

By boat, we sped out of the bay (quite nicely drenched) and as promised the rain dissipated; a massive rainbow stretched from the cliffs to the ocean. The boat hugged the coastline for most of the four-hour tour, and we saw waterfalls 1,800 feet tall plunging through green valleys and spilling out at the ocean, razor-thin cliffs making a cathedral of nature, and battered sea caves opening to the sun. We snorkeled in 30-feet deep crystal clear water, and three pods of dolphins jumped along in the white wake of our boat.

Number 2: Snorkel at Po’ipu Beach. Most of my friends are well acquainted with my (totally rational) fear of sharks in any body of water, let alone the ocean. So I did not commit to snorkeling before we arrived in Kauai. I had, however, committed quite bravely to wading out to mid-shin.

When we arrived on the south shore of Kauai at Po’ipu Beach to read and lay about, I noted the presence of maybe 15 snorkelers swimming inside a reef, which broke the large ocean waves from shore. Through narrowed eyes peering over the top of my kindle, I observed the snorkelers carefully for signs of distress, large pools of blood, or missing limbs as they exited the water.

After an hour, there still seemed to be about 15 of them. No shark losses.

My friend returned from the snorkel rental shop with two sets of masks and fins, so I made the (insanely brave) decision to give it a go. Wading out, I clung to his arm and insisted he swim on the side with the deeper (more sharks) water, because I’m just that good of a person.

In 30 minutes of snorkeling, I hyperventilated only three times, freaked out eight times, and saw at least ten types of incredible fish. Which I took as a rousing success, and even went back twice.

Number 3: Watch the sunset and stars at Polihale Beach. As you drive west in Kauai—which you certainly will do if you want to avoid the rain showers that briefly pass through the north and east sides of the island—you will eventually come to the end of the road, where a sign points to Polihale. Make a left, and for six miles you bounce along a dirt, deeply cratered road.

As in, we traveled six miles in 40 minutes. (During which time, we went through varying stages of Jeep and massive truck envy as they zoomed past our compact rental.)

But at the end of that road was Polihale Beach, an unbroken wide stretch of wilderness that fires the heart. We walked to the northern end of the beach where the sand stops and the NaPali coastline begins, marveling at the sheer cliffs. Strong wind whipped the sand against our skin even as the sun kept us warm, so we ducked behind one of the sand dunes back from the water and napped.

By sunset, the wind calmed, and we watched the sun sink below the ocean. As the light faded, we watched the stars pop into the sky. No towns anywhere near to create ambient light, we returned in pitch darkness, the stars shining as neon points in a blanket of black. Only the croaks of frogs and the swish of the breeze in tall grass accompanied us out.

Number 4: Hike to a 410-foot waterfall. Kauai has so many waterfalls, two weeks isn’t enough to come close to seeing them all. Of the ones I did see, Hanakapi’ai Falls was my favorite, partially because of the strenuous route to get there, which requires hiking the first two miles of the Kalalau Trail, often ranked as one of the world’s best hikes. At just .5 miles in (and several hundred feet up), we encountered stunning views of the Na Pali coast. At 2 miles in, we arrived at Hanakapi’ai Beach, where you do not swim—as attested to by makeshift memorials for hikers who have done so.

From the beach, we hiked into the heart of the Hanakapi’ai Valley through lush and changing vegetation, including palm trees, blankets of hot pink flowers, and soaring bamboo. Following days of heavy rain on the north shore, we crossed four major (sign-warned) streams, 14 minor streams, and slogged through miles of muddy trail—twice. Some distance up the trail, we learned from a returning hiker that a group of hikers had been caught on the opposite bank of a stream crossing the day before during a flash flood, and had spent the night there.

Now, granted, Kauai has no predators in the wild (but a heck of a lot of wild chickens) and no snakes. The average temperature in April ranges from 69F at night to 79F in the day. There are worse places to get caught overnight.

The Hanakapi’ai waterfall was a cooling reward, its spray fiercely coating everything nearby given its four-lane width. I ate lunch and admired both Hanakapi’ai and the six other falls spilling down the cliffs.

Number 5: Explore Waimea Canyon. There is an easy way and less-easy-but-more-gorgeous way to do this. Easy = drive and stop at the five viewpoints that put you on the edges of the “Grand Canyon of Hawaii.” Less-easy but so much more rewarding = hike some of the many miles of trails in the park.

From the final viewpoint of the canyon’s drive, the Alaka’i Swamp trail took us 8 miles and 5.5 hours to hike. Every curve was breathtaking, from walking along a brick red ridge on the top of the trees to a meandering boardwalk through a swamp at 3500 feet, and then, finally, hiking right into and through a cloud.

And somehow in all the beauty of the rest of that hike, I keep forgetting to mention—it began on a ridge overlooking a lush valley that plunges to the ocean (which happens to be Kalalau Valley, which you hopefully saw by boat earlier!).

Incredibly Close Runners Up: More Amazing Things to Do in Kauai

You would probably regret missing any of these, too, so definitely take more than three days for Kauai if you are an outdoors-lover. I also can’t recommend enough:

Bottom line: Hard to go wrong in Kauai. The only wrong decision, it turns out, might be to return to the mainland.